2 x  triangular shaped wedge of plastic (made from comp door off cuts ) are rawbolted to a brick wall at over 2m height, approx 1m apart.

When Metposts are bolted to these, they will dictate the angle of slant downwards of the metal clad beams inserted into the metposts..

2 x Bolt down Metposts or similar are raw bolted through the plastic wedges into the wall.

a 1m length of MCB is  rawbolted to wall above metposts & above where grp sheets will sit, Sealant is used between wall & MCB.

This is to stop rain running down wall behind roof panels, although a flashing panel could also be used.

4.
MCB's have the GRP sheet screwed onto them with hex tek roof screws. Plastic caps can be glued to screw tops for weather resistance


5.
Mcb's with grp screwed to them are inseted into Metposts & bolts tightened

6. Depending on snow load / length on MCB, a supporting MCB & Metpost can be screwed to the wall above or below the existing MCB

Approx. 150kg of screws fixings & wood dontated to the Crewe Mens Shed (which is now open again) by Cabinz CIC & the Shelter & ... 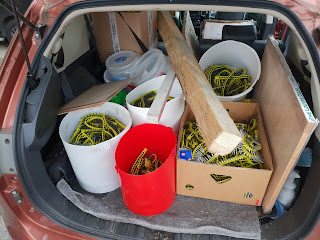